Seventeen states and jurisdictions in Alaska, Maryland, Minnesota and South Dakota adopted forms of the "Control" model. They control the sale of distilled spirits and, in some cases, wine and beer through government agencies at the wholesale level.  Thirteen of those jurisdictions also exercise control over retail sales for off-premises consumption; either through government-operated package stores or designated agents.

Click on the links to the right to review each jurisdiction’s info sheet. If you have questions, you may contact Margaret Barchine – Director, Communications. 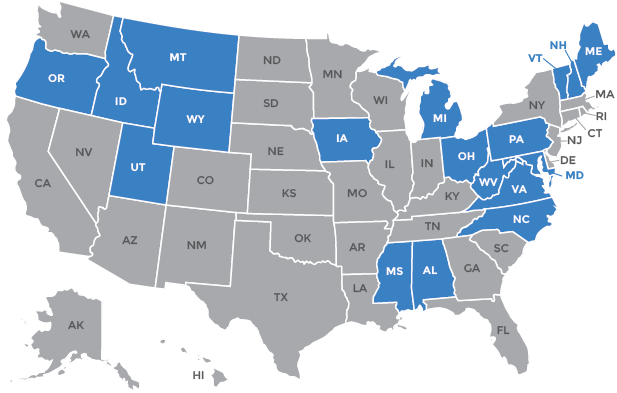 Control Systems provide to their communities:

Our mission is to promote the public interest through the responsible sales and service of alcohol beverages.

Idaho Code 23-102, 23-203, and 23-404 vests the Idaho State Liquor Division with the mission of curtailing the intemperate use of alcohol by regulating and controlling the sale of beverages exceeding 16% alcohol. All revenues derived from such sales are distributed to state and local units of government in accordance with the Idaho code

The agency’s primary mission is the administration and collection of mineral and excise taxes as well as the valuation of property and the wholesale distribution of alcoholic beverages and enforcement of liquor laws.

The Department of Alcoholic Beverage Services (DABS) has been in existence since 1935. In that year, the Utah State Legislature created the department by statute and charged it with the responsibility of conducting, licensing, and regulating the sale of alcoholic beverages in a manner and at prices which reasonably satisfy the public demand and protect the public interest, including the rights of citizens who do not wish to be involved with alcoholic beverages. The legislature also mandated that the department is operated as a public business using sound management principles and practices.

The Iowa Alcoholic Beverages Division is responsible for the regulation and control of alcohol in the State of Iowa. Iowa is one of eighteen control states that, since the repeal of prohibition, directly control the sale and distribution of alcoholic beverages. In addition, the Division is responsible for the enforcement of state and federal laws and regulations regarding the sale and use of alcohol and tobacco products.

The Office of Alcoholic Beverage Control (ABC) of the Mississippi State Tax Commission is tasked with regulating the legal and responsible dispensing of alcoholic beverages within the State of Mississippi. ABC’s major functions are described below:

The Alabama ABC Board controls alcoholic beverages through distribution, licensing, and enforcement as well as education. State and federal laws regarding youth access to tobacco are enforced, and retailers and the general public are provided information relative to the laws and their consequences. The Board also operates a chain of retail stores selling the majority of liquor purchased to consumers in Alabama.

The Bureau of Alcoholic Beverages & Lottery Operations (BABLO) is proud of its commitment to providing the most satisfactory public service for the complete distribution and sales of Powerball, Tri-State Pick 3 and Pick 4, Tri-State Heads or Tails, Tri-State Megabucks, instant lottery tickets, and the pricing, listing, and delisting of spirits and fortified wines.

The Department of Liquor Control purchases distributes, and sells distilled spirits through its agency stores; enforces Vermont’s alcohol and tobacco statues, with a strong emphasis on limiting youth access; educates licensees, and promotes responsibility. An integral part of our mission is to control the distribution of alcoholic beverages while providing excellent customer service and effective public safety, for the general good of the state.

The NHLC regulates the sale of alcohol in the state of NH. NH is one of 17 “control states” in the nation where the government directly controls the distribution and regulation of alcoholic beverages. In doing so, NHLC operates 79 retail locations knows as NH Liquor & Wine Outlets throughout NH that serve more than 11 million customers each year. NHLC serves as an essential revenue source for the state of NH, generating more than $156 million in FY 2016 for NH’s General Fund, which is used to fund programs including education, health and social services, transportation and natural resource protection. NHLC has generated more than $3 billion in net profits since it opened its first NH Liquor & Wine Outlet in 1934.

The Ohio Division of Liquor Control (“Division”) is responsible for controlling the manufacture, distribution, licensing, regulation, and merchandising of beer, wine, mixed beverages, and spirituous liquor within Ohio pursuant to Ohio Revised Code Chapters 4301. And 4303. Regulatory functions include the issuance of permits to manufacturers, distributors, and retailers of alcoholic beverages. As a control state, all beer and intoxicating liquor must be bought and sold pursuant to Ohio law.

The Pennsylvania Liquor Control Board is responsible for licensing the possession, sale, storage, transportation, importation and manufacture of wine, spirits, and malt or brewed beverages in the Commonwealth, as well as operating a system of liquor distribution (retailing) and providing education about the harmful effects of alcohol consumption.

The mission of the VABC is to control the distribution of alcoholic beverages; operate efficient, conveniently located retail outlets; enforce the laws of the Commonwealth pertaining to alcoholic beverages and youth access to tobacco products; and provide excellent customer service, a reliable source of revenue, and effective public safety.

North Carolina is one of 17 control state systems and a member of the National Alcohol Beverage Control Association. As an agency under the Department of Commerce, it is our overall objective to provide uniform control over the sale, purchase, transportation, manufacture, consumption, and possession of alcoholic beverages in the state.

Although Maryland is considered a license state, residents of Montgomery County, MD enjoy the many benefits offered by a control jurisdiction including public health and revenue generation. With emphasis on customer service and public safety, Montgomery County ABS conducts the wholesale distribution of beverage alcohol, owns and operates 25 off-premise stores and shares the retail segment with approximately 1,100 license-holders.